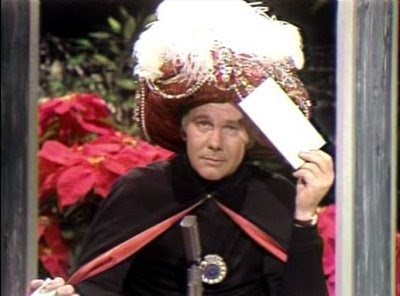 If Carnac The Magnificent did politics....

Time for some rank amateur, next-to-worthless political prognostication from yours truly.  The US Presidential / Congressional elections are exactly one week away, The Donald is still groping women out in his bus according to Hillary Clinton, and Hillary is already taking reservations from her Banker buddies...cha ching...for overnight stays in the Lincoln Bedroom according to Donald Trump.  For us the choice is simple: Would you rather die from a venereal disease or a stab in the back?

My timeline:  If Donald Trump wins we'll see some almost immediate riots / civil unrest, primarily in the inner cities where minorities will see his election as the first step to rolling back their civil rights.  That won't happen, of course, but that will be their perception.

If Hillary Clinton wins there will be civil unrest, too, primarily from those who suspect she will immediately start to work abridging their Second Amendment rights. That won't happen, of course, but that will be their perception.

And Carnac saaaaaays....Hillary Clinton by a nose.

The House of Representatives will stay in the hands of the Republican Party, but that Party will be in total chaos.  The only organized faction of the surviving GOP will be the Brown Shirts...er...the Tea Party.  Their agenda item #1; wrestle the Speakers gavel away from Paul Ryan and pass it to one of their knuckle draggers.  Agenda item #2; begin setting up special investigation units to see what misdeeds they can pin on President Hillary Clinton.  She will prove to be a "target rich environment".

The Senate races are a tough call.  I suspect the Republicans will keep their majority standing, but only barely.  If they do, nothing their archnemesis Hillary Clinton requests will ever get a committee hearing, much less a Senate floor vote.  The Supreme Court, already one member short, will likely stay that way (or get worse as more vacancies open up due to the old-timers there now clocking out).  Republicans (Tea Party members or those intimidated by the Tea Party, which is all the rest of 'em) will never vote for a nominee they feel might overturn Roe v Wade or Citizens United, upset the Second Amendment status quo, etc.

The economy will turn south, more than anything because we've been on a winning streak for a historically long time and are due a correction.  Hillary won't notice because she'll be too busy shaking down The One Percent.  She will get blamed for the recession, as Presidents always are, and her approval rating will plummet.

The House Tea Party will initiate an impeachment hearing against President Clinton, and will vote "aye" 20 minutes later.  They know there is no way the Senate will vote by a 2/3 majority to convict her, but that's OK with them.  They just have a sharp stick and they want to poke it in her eye.  It will be the centerpiece event of their Annual Summer Family Picnic.

For the next six months the news will revolve around nothing more than the upcoming Senate impeachment trial.  We might get a few days of "other" news following a terrorist attack somewhere, or if California goes missing after an earthquake, but that's about it.

In the interim, while we're busy lobbing stink bombs at each other, the banks will quietly continue their march to complete domination of us all, the insurance companies will continue to merge, first into the Big Eight, then the Big Four, and finally the Big One.  Same with Big Oil, Big Pharma, Big Ag, etc.

We'll grow some balls, round up all the above mentioned "deplorables", and ship them all off to a newly renovated (kidding) and restocked (with bread and water) Alcatraz.