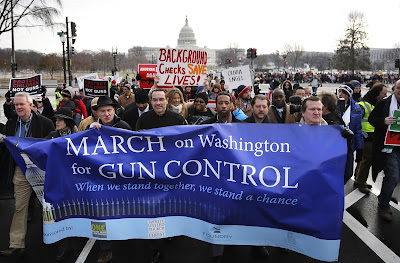 Gun violence, and therefore gun control, is all over the news these days.

My understanding is that gun control advocates are demanding universal background checks on gun purchasers, raising the legal age for gun ownership...or is it gun purchase?...from 18 to 21, and I believe banning the future sale of AR-15-style semi-automatic rifles.  My question is, supposing they are 100% successful in having their demands met, what are they going to do 6 months or 2 years from now when there is another mass shooting?  Then what?  Does anyone really believe the firearms black market will somehow disappear?  Does anyone really believe there won't be another mass shooting some day?

Maybe I'm wrong, but I think many of those things were much less prevalent in society than gun ownership is today.  And the two that come closest in number of Americans participating, alcohol and drug use, have been the issues where legislation has been the least effective.  We simply haven't been able to peddle fast enough to get ahead of those problems.

I applaud those who recognize we have a serious gun violence problem and are actively doing something.  But aren't we just treating the festering sores and not the underlying disease?  Are we being honest with ourselves?

Posted by Lowandslow at 9:31 AM