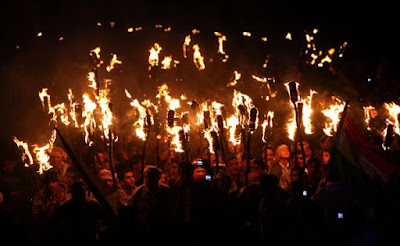 I've been saying for quite a while now that income inequality is the most important issue of our time.  I'm not looking at this on a micro level, liberal vs conservative, Democrat vs Republican.  This is more than "the 1% are greedy" or "the losers won't work".

Here's what we should IMO take away from this on a macro level this election season:  When enough people feel like they have hit bottom, that they have nothing left to lose, they will revolt.  They're now revolting, and it's real, if not (for now) violent.  I'm not saying the revolt is justified, or is right or wrong.  I'm just saying it's REAL.

Donald Trump is appealing to more than enough people to win the Republican nomination for President. He's talking about stopping American companies from laying off American workers and moving overseas, and about bringing good jobs back to America.  These are issues the down-and-out masses are concerned about.

Bernie Sanders is appealing to (almost) enough people to win the Democratic nomination for President.  I doubt Hillary Clinton, the old school legacy politician, is sleeping well at night.  Bernie is talking about our rigged economic system/tax system, our much-too-powerful financial interests, and, yes, income inequality.  These are issues the down-and-out masses are concerned about.

Can you imagine our bankers and our titans of uber-capitalism rooting for a Hillary victory this November?  Unlikely as it might seem, she might be their best hope.

Today the revolt is polite.  Enough people are fed up with the status quo and are demanding a better deal.  They are making themselves heard...loudly...at the ballot box.  Unless the masses see their lives getting better soon, tomorrow's revolt might be more aggressive, dare I say even violent.

I nailed it.  I predicted this, but I'm honestly not happy about my insightful prognostication. I'm scared shitless, both for America and the larger world.

Posted by Lowandslow at 9:57 PM