A calm look at guns in America 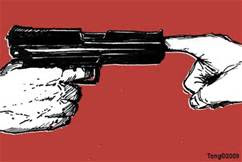 I saw Donald Trump on the news today talking about the tragedy in Orlando, saying it would have ended much differently if there had been some armed good guys in the crowd able to shoot back. I've never heard a more naive statement in my life!

First of all, it is extremely difficult to hit a target, even a man-sized target, at more than 15-20 yards with a handgun.  I've seen people at the gun range shooting at a stationary paper target who miss as often as not from that distance.  Go try it for yourself and see what I mean.

Now throw in a real live crazed person, armed, shooting back, and hundreds of people screaming and running in every direction.  Mix in a healthy shot of adrenaline, and perhaps more than a little alcohol (remember, it was a nightclub/bar), and your odds drop to near zero.

What does go up are your chances of hitting innocent bystanders, and if that happens you are responsible for where your rounds abruptly stop.  Dumb idea Donald!  He obviously has never been shot at, and probably has never even fired a gun.

There are competing bills before Congress right now seeking to prohibit those on the "no fly" list from being able to buy firearms.  Neither side is being honest with us.  Despite what they say they are NOT sincerely wanting such reforms.  Both the Democrats and Republicans have attached some of their pet partisan causes to their respective bills that they know the opposition will shoot down.  (Oooo....sorry.  Bad pun.)

If they would both put aside their politics and put forth a stand-alone "no fly-no buy" bill,  they might possibly make a deal.  The fact that they won't, in the wake of the Orlando massacre, says all you need to know about Washington politicians.  They're more interested in vying for political advantage than working for us.

Despite what we hear on the 24/7 news, our country is NOT becoming more dangerous as more guns get into the hands of more Americans.  (FYI...according to the Bureau of Alcohol, Tobacco, Firearms, and Explosives, gun production is up 140% during the Obama presidency.) 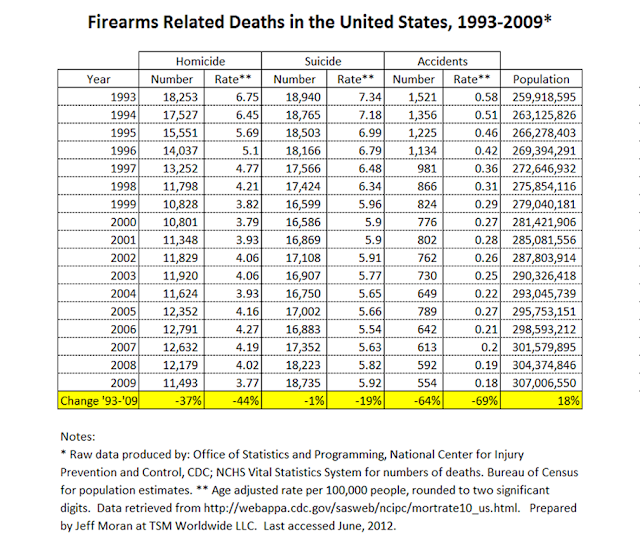 Comparing 1993 to 2009 (I couldn't find a more current chart) you'll see that the homicide rate by firearm, the suicide rate by firearm, and the accidental death rate by firearm are down 44%, 19%, and 69%, respectively, all while the population increased by 18%.  While even one death is one too many, my point is the trend is down, not up.  We are NOT sinking into anarchy!

For some reason many people still think of my Texas as a land of tumbleweeds, rattlesnakes, and gunslingers.  They're only slightly wrong.  *wink*  Here is a fact you might find interesting about us Texans and our guns:

Through the end of 2015, according to the Texas Department of Public Safety (who issues "right-to-carry" handgun licenses) there were 937,419 citizens actively permitted to carry a gun.  I'm one of them.  That sounds like a lot of people running around with guns on their persons, doesn't it?  But despite this, with 43,924 total violent felonies of all types committed in Texas that year, only 108 were committed by right-to-carry license holders.  This is a minuscule .2459% committed by gun toters.  The vetting process works!

Those who are strong proponents of gun control often point to Australia and the UK as examples of how the state can outlaw (virtually all) guns and all will soon be well.  Those are not good apples-to-apples comparisons with the US.

In 1996 Australia prohibited almost all citizens from owning guns.  Through a buy-back program, approximately 700,000 guns were sold back or voluntarily turned in to the government, and another 260,000 were suspected still clandestinely held.  At the time Australia's population was 18.3 million people.  Statistically that means 960,000 guns were in the hands of private citizens, or .0524 guns per person.

In 1988 the UK (not including Northern Ireland) prohibited their citizens from owning most types of guns.  Through a buy-back program, approximately 162,000 guns were sold back or voluntarily turned in to the government.  At that time the population of the entire UK was 56.7 million people, which translates to .00028 guns per person.

In the US today, with a population of 323.8 million people, there are estimated to be between 310 and 350 MILLION guns in private hands, or (statistically) one gun per person.  Honestly now, what do you think the odds are of getting American gun ownership numbers down to levels even remotely close to the levels of Australia and the UK pre-ban, much less post-ban?

Of course we can try to clean up our act, but let's not delude ourselves into thinking we can pass some new gun control laws and then launch into a rousing chorus of Kum Baya.  This is why I realistically say we need to focus first of all on getting guns out of the hands of those (relative) few who are causing most of our problems.  Such a plan would cause minimal inconvenience to the majority of people who are causing no problems in the first place, likely gaining their support for more targeted measures later on.  Think this through, friends.  We're chasing windmills.