[We've] got a tiger by the tail 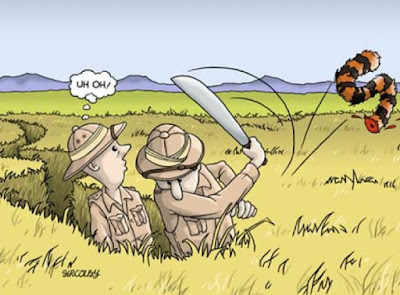 Remember the old country song by Buckminster Owens, "I've got a tiger by the tail"?

Well, I thought the day I met you, you were meek as a lamb;
Just the kind to fit my dreams and plans
But now, the pace we're livin' takes the wind from my sails
And it looks like I've got a tiger by the tail

I'm thinking Minster Buck saw something the rest of us didn't.  Was he writing about the 21st Century world we would soon be living in?  Was he writing back in 1964 about how we in the West would soon be grabbing hold of a bunch of rag-tag religious fanatics in a part of the world we would be hard pressed to find on a map, only to learn they were a tiger we would have no idea how to let go of without getting mauled?

Here's how we got into this mess, the epitome of "unintended consequences":

The USSR, wanting to support their puppet Marxist allies, invaded Afghanistan in 1979.  The collective Afghan warlords fought back, aided by 35,000 foreign Sunni Muslim fighters who became known as the mujaheddin, and were supported financially and materially by the USA.  Our goal was to simply foil our arch-enemy the Soviet Union.  There was nothing there for us, we just wanted to poke a sharp stick in their eye.  Our side eventually won and the commies permanently tucked tail and ran in 1989.

Shortly thereafter, in August, 1990, Saddam Hussein invaded Kuwait, and the West was concerned (scared shitless actually) that he would get control of the Saudi Arabian oil fields.  If he did, we were SCREWED!  Geo Bush the First quickly offered to send our military to defend the Saudi's and drive Iraq out of Kuwait, and Osama bin Laden offered to bring his battle hardened mujaheddin and do the same.  The Saudi's cast their lot with the US.  This miffed bin Laden and the fight was on.  (Numerous groups of hard-core Islamic fundamentalists had begun to congeal under bin Laden by 1988 and eventually became known as Al Qaeda, "The Base".)

One of the hardest-core of the bunch, the branch in Iraq, later split off and morphed into what we know today as ISIS.  For a while they were going gangbusters, gaining control of large swaths of Iraq and Syria.  As the old saying goes, "success breeds success"....Muslim malcontents from all over the world looked at their brothers winning for a change and wanted in, too.

In short order ISIS began planning for their ultimate demise as a Caliphate controlling land in the Mid East....it was one of their prophecies....and began sending trained soldiers back to where they came from to snipe at us guerrilla-style.  Now they and their home-grown extremist buddies are stalking us.  Their numbers are still pretty small, but it seems like they're hitting far above their weight class.

I wonder if any of this would have happened if we had just told the Soviets back in '79, "You want Afghanistan?  It's all yours....the big rock piles, the ignorant pissed off peasants, the whole mess.  Good luck."  Would Osama bin Laden have ever assembled his merry band of jihadists without US support?  No Al Qaeda, no ISIS?  As objectionable as "fracking" for oil is, if we had pursued it earlier, could we have reduced our crushing dependency on Mid East oil sooner?  Would we have cared then if they had all just jihadided each other into oblivion?

Now the BIG QUESTION....do you think we've learned anything from this mess we've gotten ourselves into?

Posted by Lowandslow at 5:08 PM