Things we should be thanking Donald Trump for.... 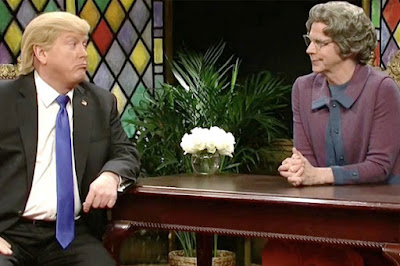 ....besides some of the best Saturday Night Live skits ever!

Yes, The Donald has had much ridicule heaped on him this election season for his....umm....unusual ideas.  But he has also brought into the light some issues that had been largely underground for years.  You might have to look deep, but he's done us all a service and maybe secured for himself a worthwhile legacy in the process.  To wit:

TRADE AGREEMENTS  Most Americans don't understand trade deals.  We give a little, they give a little, we both get what we want....win/win, right?  Hardly!

Trade deals are driven by what's in the best interest of business, and not necessarily (rarely, actually) in the best interest of the American workers.  Why do you think millions of well-paying American jobs have have moved beyond our borders, and too much of what we've gotten in return are much-lower-paying warehousing and delivery jobs?  Because businesses can make more $$$$ doing business that way.  Screw US!

American businesses used to have America's interests at heart, but for decades now all they've cared about is making money for themselves, however/wherever they can.  If Carrier Corp hands out 1,000 pink slips in Indiana and hires a like number in Mexico, or Indonesia, etc, they don't care!  There's rarely even a passing thought of good 'ol America's best interest.  Their quarterly profits are up, their executive bonuses are up, their shareholders (many of them foreign investors) are happy, the job-gaining country is happy....the big losers are the 1,000 laid-off American workers.

We need trade.  We can produce much more than we can consume ourselves.  I'm all for trade, if done fairly, but what we've negotiated recently are simply BAD DEALS!

OUR F___KED UP TAX CODE  Most of us only know "we" pay too much, and "the rich" pay too little.  That's all we ever hear.  It's hard to wrap our arms around that opaque concept.  Donald Trump put a real-world number on it.  How many of us had ever heard of a "loss carry forward" before Donald Trump's $936,000,000 business boo-boo?  That sweetheart tax deal has helped him (and many other of his uber-rich buddies) to avoid paying hundreds of millions (billions?) of dollars in taxes.

That has led us to take a deeper look at our ridiculously complex 75,000 page +/- tax code, a code that got that way due to special favors granted by lawmakers to wealthy special interests in exchange for.....?
The rich usually deserve to be rich....they work hard, they work smart, they take risks....more power to them.  But when they can take their hard-earned gains and, with the signing of a piece of tax legislation, see their wealth explode with little additional effort on their part, that's just WRONG!  That's what "income inequality" is all about.  That, more than anything else, is what is killing our middle class!

You're likely to ride off into the sunset next month, Donald, to take up company with Michael Dukakis, Walter Mondale, John Kerry, and all those other historical footnotes, but if your spotlight can somehow enable us to fix our tax code and trade policies, you'll at least have that as a legacy you can be proud of.

Posted by Lowandslow at 6:30 PM