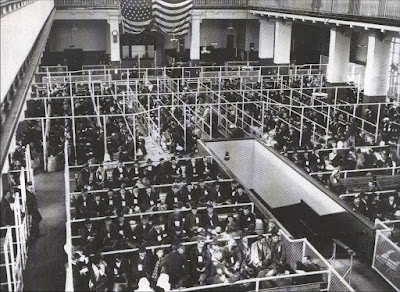 Immigrants waiting to be processed at Ellis Island, circa "long time ago".

Once again immigration is front and center in the news.  This time it arrived there after an immigrant from Uzbekistan, Sayfullo Habibullaevic Saipov, rented a truck and mowed down numerous cyclists in NYC, killing 8.  The extended controversy is that he was admitted to America on some sort of a lottery based on "diversity", meant to allow people from places who seldom immigrate here have a chance for a better life.

President Trump is dead-set against such diversity immigrants, citing numerous grievances, most of them bogus.  (The flood doors were not just opened allowing anyone access.  There was still vetting to make sure the newcomers weren't dangerous felons, etc.)  Instead he wants to limit new immigrants to those who can bring skills and talents America needs.  He calls it "merit based" admission.

This contrasts markedly with our history of welcoming the world's "tired, poor, and huddled masses, yearning to breath free."  In the 19th and early 20th Century boats docked weekly with immigrants from Ireland, Italy, Poland, Hungry, Lithuania, and elsewhere who brought with them few advanced skills.  They were, however, used to hard work, and that's how they made a place for themselves in America.  Agricultural labor, assembly line workers, and general unskilled labor were always needed.

Times have changed.  Today we have all the agricultural laborers we need available from Mexico, if only our guvment would get their shit together and establish some reasonable rules for their legal employment.  Manufacturing is moving as fast as they can to more mechanization, where one technician at a console can oversee a dozen robots doing the work that many humans used to.  And we have far too many high school dropouts as it is whose lot in life will likely be as unskilled labor forever.  In short, I doubt we need any more unskilled, general labor, which is too often what new immigrants are when they arrive here.

While I am anything but a fan of Prez Trump and the Tea Party, I find it hard to fault the idea that new immigrants need to bring with them skills and talents that will benefit both them and America.  I don't mean to suggest they all need to be doctors or IT professionals.  They can be mechanics, plumbers, electricians, construction equipment operators....we need people with those blue-collar job skills.  And to be compassionate, we could encourage businesses via tax incentives for example, or any other social non-profits/churches, to sponsor and agree to train unskilled immigrants who are willing to work hard and learn.  That would be the best possible win-win.

My head says this is reasonable, yet my heart says it's wrong to just ignore the millions of people who are stuck in lives of utter despair overseas.  We're better people than that.  What I'd like to do and what I realistically can do are not the same.  This is a serious conundrum.

What I do know is that we can't just keep kicking the can down the road.  We need a real immigration policy that is good for America, and helps as many people as possible move here and improve their lives, too.  Meanwhile Congress is being pulled in various directions by special interests who benefit from us not having a coherent immigration policy.  These Beltway puppets are the ones we need to export ASAP, if we could only find countries dumb enough to take them.