It isn't exactly "Breaking News" when I say that people get really touchy when you talk about getting into their wallets.  "It's MINE, I WORKED for it, you CAN'T have it!"  And this, IMO, is why our government today is so dysfunctional and our people are so upset.  One economic class feels they're paying for benefits that another economic class is receiving, and to be honest, it's largely true.  (Their elected political manipulators see this perpetual standoff as their job security.)

TAXES.  Just saying the word gets most people's blood pressure up.  The average middle class guy feels he's working 100 mph to pay for day care, to put braces on his kids teeth, to somehow pay another semester's tuition for his oldest to stay in college, to pay the deductibles and co-pays on his heath insurance, or if he's an "independent contractor", to pay for his family's health insurance that might cost more than his house payment, etc.  It's a struggle for sure.

Meanwhile, in his mind, another economic class gets free child care, food stamps, rent subsidies, college grants (that require no payback), free medical care (via Medicaid) and even a free cell phone, all paid for by HIM!  And then when you interject race into the equation, it really gets nasty!  To the average middle class taxpayer (statistically likely to be white) the average beneficiary of our social safety net is black or brown, and now includes immigrants, too, hence the animosity.  Facts to the contrary be damned!  He simply can't fathom his economic situation deteriorating to the point he might need some of those services himself some day.  These are benefits (he thinks) he'll never receive. 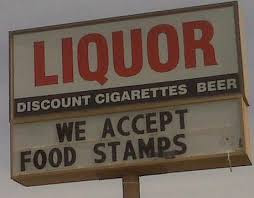 This is where he thinks his taxes are going.

This is why the idea of a tax increase to balance the budget, for example, is a non-starter.  "MORE money to give to those bums? Oh HELL no!"

In their minds they, personally, aren't getting anything for their tax dollars (hello!...national defense, highways, etc?), with the exception of Medicare and Social Security.  Ahhh....don't you love it when a Tea Party supporter holds his sign up high that says "NO SOCIALISM IN AMERICA!!", then says, "but don't mess with my Medicare or Social Security."  *dude, those programs are the epitome of socialism!*

As long as people don't feel like they are themselves getting anything for their tax dollars, they're going to resist.  Call them anything you want....selfish, greedy, uncompassionate....when you get into people's wallets, the battle lines will be drawn.  Let's just hope the rest of the world stays more f__ked up than us so they'll run over here with their $$$$ and finance our debt.

Posted by Lowandslow at 7:37 PM