Senator Cornyn, you're up. Senator Shelby, you're on deck. 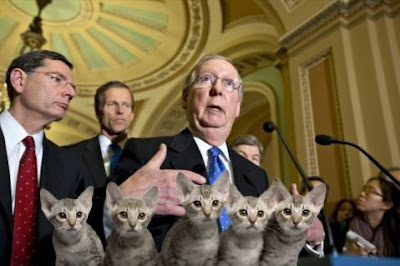 Thune....you're batting clean up.  You all know the drill.  Now, off to hair and makeup.

Our latest Scandal de Jour has our Attorney General being accused of lying to his Senate compadres in order to gain their confirmation votes.  So did he lie?  He says it all depends on what the definition of "is" is.  (Old Clinton-era joke.  Look it up.)  His fellow Republicans are in full damage control mode, all lined up to say what a great husband, father, and Saint our beloved AG is, and besides, the Cubs won the World Series so all is well.  Look...SQUIRREL!

Meanwhile, across the hall, the Democrats are all foaming at the mouth, taking bids on building new, improved gallows.

Oh, how quickly we forget.  Just a year ago the rolls were reversed.  Former Sec State Hillary Clinton was accused of playing fast and loose with America's state secrets being run through her private email server.  Reid, Pelosi, Schumer and the rest of the Democratic party faithful were calmly shooing us away saying, "Everyone go home.  There's nothing to see here, folks.  Move along."  Not surprisingly, the Republicans saw things a bit differently.  They saw Hillary as being guilty of High Treason.

Let me state the obvious:  Our elected civil servants can't be trusted.  They just can't.  Oh, I might could find a couple if given enough time, but they're rare as purple Unicorns.  The truth is a foreign concept to them, and unless their buds are caught red-handed on camera cramming $100 bills into their coat pockets, they're going to stick up for each other.

"He is such a fine boy, so kind to his mama, and a wonderful Sunday School teacher, too.  We all love him so."  xoxo

Fifty years ago they could have probably gotten away with their crooked ways, but it's much harder for them today.  What's the difference?  The media.  The press is everywhere, and if they don't have their cameras up and rolling when needed, there are lots of civilians out there with cell phone cameras who do.  BUSTED!

Don't let anyone tell you the media is fake, that they're "the enemy of the people".  If they weren't there, we wouldn't have lasted this long as a republic.   Don't limit yourself to just one source of news, and don't believe what just one source tells you.  Yes, different news organizations have very definite prejudices, but when taken as a whole, the truth will come out.   Freedom of Speech is #1 on the Bill of Rights Top Ten List for a reason.

Posted by Lowandslow at 7:56 AM