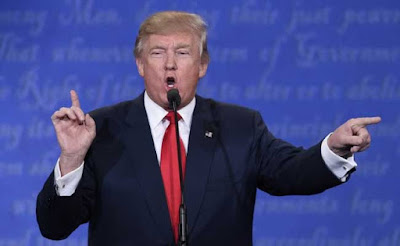 "So today I'll be up here, but then tomorrow I'll be over there.  Everybody got that?"....said President Donald Trump at his first Cabinet meeting.

This week was a good example of that with VP Pence, Sec Defense Mattis, and Sec State Tillerson all in Europe to reassure our allies there, and NATO, that we are solidly with them, just like we have been since we all kicked Hitler to the curb back in '45.   But....DOH!....then our Chief Incoherence Officer (CIO), aka President Donald Trump, piped in by saying they'd better pay up or we're outta there.

And just yesterday our CIO told a room full of influential conservatives that he was going to whip up on those %^&^* errant Muslims, and hours later his National Security Adviser, Lt. Gen. McMaster, came along behind him and said the boss was....ummm.... just having a bad day.  *ahem*

Our CIO also told the crowd our program to expel Mexican illegals was a "military operation", but then his Sec of Homeland Security, a 4-Star Marine General (Ret), had to step up and say no, it was NOT a military operation.  Wha....what?

The only person who seems to be operating on the same wave length as the President is his Senior White House Adviser, Steve Bannon.  Not long ago I wondered aloud if Bannon was Trump's Rasputin?  (Grigori Rasputin was the glassy-eyed mystic/healer who became a favored adviser of the last Russian Czar after convincing him he could heal his seriously hemophiliac son.  He didn't, and his political advice reeked, too.)

Wanna hear an eerie coincidence?  I heard someone on TV recently say Steve Bannon's style was straight out of the playbook of Aleksandr Dugin, so I looked Dugin up and this is what I found:

Aleksandr Dugin
Aleksandr Gelyevich Dugin is a Russian political scientist known for his fascist views who calls to hasten the "end of times" with all out war.  Wikipedia

Essentially Dugin says push, coerce, intimidate, and if it takes a war in order to prevail, so be it.  A nuclear war isn't unthinkable.

And speaking of Russia, what's the deal with Trump's bro-mance with Russia / Putin?  When all our intel guys say they caught the Rooskies red handed meddling in our election, why does Trump just shuffle his feet and yell SQUIRREL?

Why did Trump's man Flynn tell the Russian Ambassador to not worry about the sanctions we've placed on them?  First Flynn said he didn't say it, then admitted he did and was fired for it.  Now that's a scandal all by itself.  Why have Republicans so far tip-toed around investigating any of this?  (One Congressman lamely said an investigation would take up too much congressional "band width".  HUH?)  Why did Reince Priebus (Trump's Chief of Staff) ask the FBI to say it was no big deal?  Maybe it wasn't, we don't know, but there sure is a lot of smoke.  Something smells!

And just coincidentally, still speaking of Mother Russia, here are a few interesting facts:  Russians are seriously underperforming thinkers.  Russian's share of international patent applications is just two-tenth's of 1%, despite having 2% of the world's population and 5% of the world's college graduates.

Also, due to widespread excessive smoking and drinking, the life expectancy of the average Russian today is just 64, with a 15-year-old Russian boy having a life expectancy 3 years less than his counterpart in Haiti.   Haiti!  (Source: Forbes)

Yeah boy....we really should pal around more with those cool Russians.  Good guys to suck up to, Mr. Bannon.  *NOT*

Posted by Lowandslow at 9:58 AM