Heads they win, tails we lose

Have you heard the story of the family who "won" tickets to a super-popular concert, only to come home afterwards to find that thieves had backed up a truck to their house and hauled off everything they owned?  They'd been "played", big time! 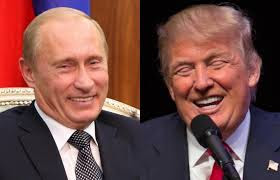 That's what is happening right now to America.  Prez Trump has taken us all on a world-class election experience, but now we're back home looking around and finding that we've been picked clean by Russian strongman Vladimir "Pootie Poo" Putin.  He's playing us.

"The Donald" Trump has had his feet propped up on the Oval Office desk for less than a month now, but has spent all his time so far, except to tweet something about a North Korean missile launch, dealing with his Executive Order boo boo, his ongoing fight with the courts, his obsession with 3 million (invisible) illegal voters, trying to get some of his dud cabinet choices....think Sec Ed DeVos and that burger flipping (Hardee's CEO) Puzder guy....past the Senate, and now dealing with the Mess Formerly Known As General Mike Flynn.  LOOK....OVER THERE!

Meanwhile Pootie Poo is running amok, doing pretty much whatever he wants around the world. 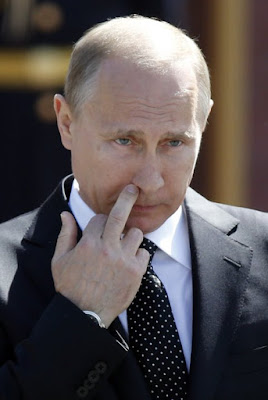 Russia today has no intention of vacating Crimea, and is in fact ramping up their efforts to destabilize Ukraine further.  Russia has successfully propped up its Syrian puppet Assad, while leaving the fight to defeat ISIS essentially to the rest of us.  He has strengthened his ties with Iran, even setting them up with a state-of-the-art air defense system.

Meanwhile the Iranians are harassing the US and others in the Persian Gulf, funding the Houthi rebels in Yemen to the detriment of our ally (?) Saudi Arabia, yada yada, all while receiving a wink and a nod from Putin.  The Russians have also installed nuclear-capable cruise missiles in Kaliningrad (Russian property sandwiched between Poland and the Baltic states of Estonia, Latvia, and Lithuania) in violation of our nuclear arms treaty dating back to the 1980's.  In response, I'm not even sure Trump withheld his Valentine card to his good buddy Putin.

Buoyed by their successful tampering with our recent elections, the Russians are now actively attempting the same in the upcoming elections in France, Germany, and elsewhere in Europe.  And Putin's response:  "Nope, wasn't me.  I've been busy scraping my mother's bunions."

The European Union is trying to NOT become the next Humpty Dumpty, and NATO is wondering if the US has their back (and their front, too).  Advantage Pootie Poo.  The Russians even have an intelligence gathering ship parked off our East Coast (which probably happens more often than is reported).

Can you name for me one place in the world where Russia is not working overtime trying to put the screws to us?  We have become backbone-less.

All the while, President Trump is furious that his man Flynn was caught telling the Rooskies to not worry about the sanctions we have in place against them, but not by the fact that he did it!  He seems to love leaks when they help him, but blows a fuse when they go against him.  Hello, goose / gander?

Republicans are no more going to go after Flynn than the Democrats went after Hillary over Benghazi or her emails.  The American people's interest, and perhaps even their security, seems to matter less to our politicians than preserving their own power and privilege.  *sigh*

Posted by Lowandslow at 2:34 PM