What's this button do? 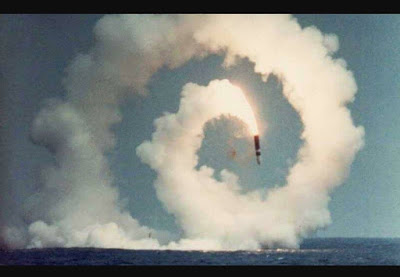 North Korea tried Saturday to launch a ballistic missile, and just like their last test attempt, it also failed.  Crashed and burned big time, it did.  The question now is WHY?  Was it simply a case of inferior engineering, or something else?  Sunday the former British Foreign Secretary suggested it was likely that a US cyber-attack was responsible for the North Korean missile's spectacular failure.

We've heard for years now about other countries successful hacks / cyber attacks on American commercial and public interests.  Through all this I've been wondering, "What are we capable of doing to them?"  Of course, barring a security leak, we'll never know for sure.  But if science is truly on the cusp of being able to disable enormously expensive weapons systems with cyber commands from a dark, secure room somewhere, this could be a world "balance-of-power" game changer.

This potential new form of dominant warfare has far-ranging implications.  For many decades there have been only two true superpowers, the USSR / Russia and the US, with the US generally believed to have a considerable edge.  "Superpower" being defined as quantities and qualities of missiles, warheads, aircraft, submarines, tanks, etc.  Only a select few advanced countries could get into our very exclusive club.

Now, with a relatively small financial investment, many smaller countries could soon find themselves in the Cyber Big Leagues.  Surely tiny Israel is there right now, joining the US, Russia, and China in the top tier.  Other potential members might include N Korea, S Korea, Japan, India, Iran, Pakistan, Turkey, and a few others you wouldn't think of as likely superstars.

Can you imagine the challenges to traditional spheres of influence where former minor league players can demand and win concessions from today's superpowers?  Where most of today's massive aircraft carrier battle groups and nuclear-tipped missiles are made redundant?  Where warfare will be (even) more about electronic / digital measures and countermeasures than about the actual hardware?  Will today's heavyweights be able to gracefully and willingly share power?

For those who are today willing to appease the Tea Party's thirst for tax cuts at all costs, please think twice.  Cutting funding in the wrong places, such as in education, especially in the nerdy fields of science, technology, engineering, and mathematics, would likely come back to haunt us in the not-too-distant future.  It's time to double-down on funding our future.  Cyber-nerds sitting at computer keyboards may not be as sexy as a fleet of stealth bombers, but they will likely someday be far more important to our national security.

Chew on that thought for a while.

Posted by Lowandslow at 9:31 PM