The only acceptable outcome: We win, they lose 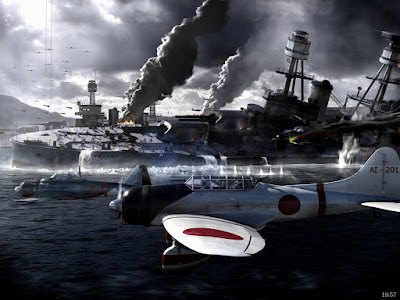 When Pearl Harbor was attacked in 1941, it was pretty obvious who did it....the sky was full of planes emblazoned with the Rising Sun.  Japan!

The same was true in 1939 when Germany attacked Poland, in 1967 when Israel got the jump on the Arab nations surrounding them, and in 1991 when the USA went into Saddam Hussein's Iraq.  It was obvious who the combatants were because they had insignia on their tanks and planes and uniforms.  It was mano a mano, black hats vs white hats.  Old school warfare.

But when peasant guerillas worked their Vietnamese fields by day, then went on the attack at night, it was difficult to know who we were fighting.  The rules began to change.  Today they're changing again.  Today we're being attacked, and this time we're not even sure who or where they are.

Hitler couldn't say, "Nope, those aren't our guys" after we saw them.  There was physical evidence to the contrary.  But today Russia's Vladimir Putin, after his cyber-warriors hacked into sensitive American political files and emails, can simply say "This is nonsense.  We have done nothing.  Show me your proof."  His cyber-soldiers don't leave behind flags or insignia on the side of tanks or airplanes.

Our geeks can today finally say with great certainty it was Russia who interfered with our recent national elections (while not impossible, it's extremely difficult to backtrack a cyber attack), and I'm sure after a month or so of intensive investigation France will say it was also Russia who tried to influence their election (which BTW is tomorrow/Sunday).  German elections are later this year, and I'll bet you a steak dinner Russian political hacking will occur then, too, with the aim of helping whichever candidate Putin thinks will be more friendly to him.  All our aircraft carriers and ICBM's and special forces will be helpless to defend us.  We're not going to nuke someone we're not absolutely certain harmed us.  It's unthinkable, and Putin knows it.

National security no longer necessarily means guarding a border or builder bigger, better bombs.  It means outsmarting our adversaries while not getting caught ourselves.  We need to review where we're spending our defense dollars.  We need more for science and technology education, and less for some stupid border wall.

Ronald Reagan showed the Soviet Union they didn't have the financial resources to go toe-to-toe with us militarily, which caused them to throw in the Cold War towel.  Donald Trump needs to double down on the economic sanctions Barack Obama and our allies put in place to back down Putin today, and maybe even cyber attack them just enough to show them two can play that game.  If Mr. Trump flinches, IMO that should be grounds for impeachment followed by a treason trial.  We can't lose this one!  Cut Putin no slack Mr. President, and for Pete's sake, get yourself and/or your people out of bed with him.