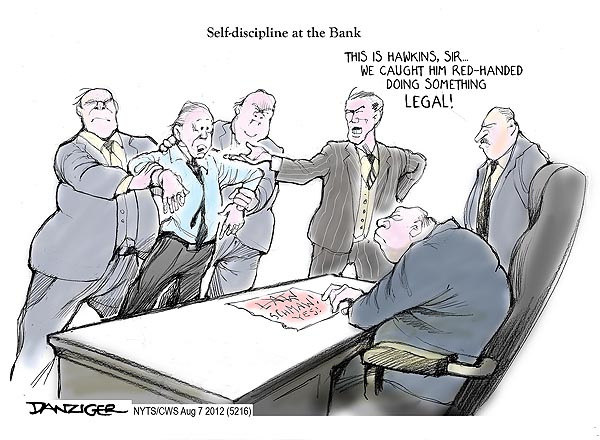 Damn you Hawkins....don't you know we have a reputation to uphold?

For the past few months, and I'm sure for many more months to come, the United States, and much of the rest of the world, too, has been fixated on what Donald Trump and his band of merry men have been up to.  Is Putin using a condom?  Where are Prez Trump's tax returns?  Did he lie?  On and on.

And in other Breaking News, we're still all hot and bothered about which bathroom transgender people can use, whether same sex marriage should be allowed or smacked down, whether Black Lives Matter more than any other lives, whether or not Kim's butt is getting bigger, whether you pronounce Qatar "Cut-er" or "kuh-Tar", etc.  All those things together pretty much take up all 24 hours of our modern 24 hour news cycle.

But SURPRISE...there's more going on in the world than they've told us about we've been allowed to know, namely that the BANKS have been scheming relentlessly behind the scenes to get control of what little money they DON'T already have.  Example in point, from today's BBC news:

"An international group of bankers, lawyers and stockbrokers - reportedly with links to the City of London [Europe's major financial center]- appears to have fiddled the tax system, employing practices which were at best unethical, at worst illegal [italics added].  Ultimately they may have deprived the state [Germany] of nearly €32bn (£28bn; $36bn)."

And they almost got away with it, until a young administrative assistant in Germany's central tax office noticed that she was receiving claims for huge tax rebates from a single US pension fund.  BUSTED!

Closer to home, the US House of Representatives last week voted to gut most of the Dodd-Frank banking reforms put in place after the financial meltdown back in '08.  The banksters have pretty much already poked D-F full of holes anyway, but this is just their way of kicking the rest of us in the teeth.  While we were all looking left, they quietly ran right for the win.

If you're keeping count, since 2008 the 20 largest international banks have been fined over a  QUARTER TRILLION DOLLARS for their illegal activities....and they're not the least bit ashamed of it!

Meanwhile we sit here glued to the TV wondering whether Trump's Atty Gen, Jeff "Goober" Sessions, had grits for breakfast this morning?  *sigh*

Let that soak in for a minute.

Posted by Lowandslow at 5:53 PM