My Ancestry DNA results are in, and the winner is....

My long awaited Ancestry DNA results came back yesterday, and they say I have a "high probability" (99%) of being European. Specifically: 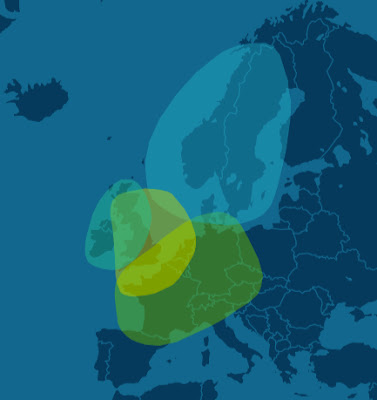 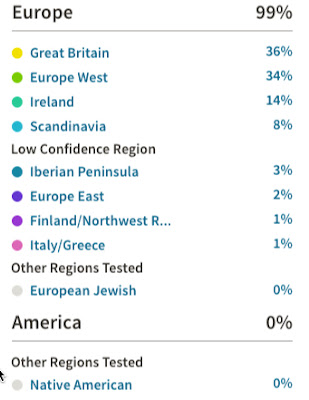 "Great Britain" is defined as England, Scotland, and Wales.

"Ireland" is defined as Ireland, Scotland, and Wales.  (Looks like Scotland and Wales get 2 shout-outs.)

"Scandinavia" is defined as Norway, Sweden, and Denmark.

With "lower confidence", they suggest I might be 3% from the Iberian Peninsula (Spain and Portugal), 2% from Europe East (Poland, Austria, the Balkans, etc), 1% from Finland / NW Russia, and 1% from Italy / Greece.

I have a "very low probability" (less than 1%) of having ancestors from Africa, and 0% from Asia, South America, or anywhere else in the world.   They say I have 0% chance of being Native American, which surprises me greatly.

These are based on DNA matches that cover the past several thousand years.  Over the past few hundred years (all here in America) my ancestors are likely from 2 regions, both heavily settled by North / West Europeans:

The most likely route to Texas would be through Tennessee, Arkansas, and on to here.  Many Revolutionary War veterans were given land grants in Tennessee.  Some moved on to Texas to seek adventure fighting in our War of Independence from Mexico in 1836, and later some eventually moved to Texas by the lure of Black Gold.

This group first arrived in America mainly through Virginia.

A second, less likely way I may have arrived here is via a more southern route...South Carolina and northern Georgia, Alabama, and Mississippi.  (There was apparently a bit of romance going on with the Tennessee crew.)

This possible branch of the family tree hit our shores mainly through Virginia and the Carolina's.

There is much more Ancestry DNA info I have yet to digest, but this, in a nutshell, is ME!  Have you done any DNA research?  If so, where are you from?

This is REALLY COOL stuff to know.  :)