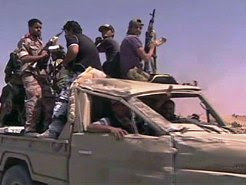 ....actually it's a truck, but we're splitting hairs.

I want one of those little ISIS Edition Toyota trucks.  Those things are just the best!  Think about it....they can be strafed by jets firing bullets the size of refrigerators and it doesn't faze them.  Napalm just seems to scorch their paint a bit.  Tomahawk missiles might blow them up, but apparently all you have to do is roll them over and they just start right up again, never mind a few missing parts. And if you ever want to load up the guys and treat them to lunch at Applebee's, they'll accommodate 10, plus their grenade launchers.

The best part, though, is they don't ever need gas.  True!  Whenever they show drone footage of the destruction in Syria or Iraq, have you ever seen a gas station?  Or a NAPA store?  Come to think of it, I don't think they ever need replacement tires, either.

I think Ford and GM and all the rest have been upselling us a bunch of phony maintenance stuff.  Wise up America!