I've never been a big Al Franken fan.  I love Saturday Night Live, but I never much enjoyed the skits he was in when he was a SNL regular/writer.

Then he went on to become part of the ill-fated Air America liberal radio network, which cemented him in my mind as a far-out left winger.  And anyone who knows me knows I don't like far-out ANY wingers. 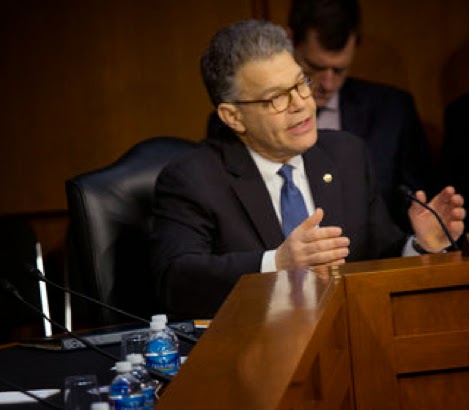 Since 2009 he's been SENATOR Al Franken of Minnesnowta.

Imagine my shock when I learned that he and I agree on something.  On the Senate Judiciary Committee he's become their main anti-trust advocate.  Right now he's all hot and bothered by the proposed $45B buyout of Time Warner Cable by Comcast.  Sic 'em Big Al!

The business interests in our country have for years been obsessed with mergers.  Through their eyes it's a way to eliminate competition, become more efficient (fewer marketing departments, fewer accounting departments, etc), and MAKE MORE MONEY.  Never mind those who will lose their jobs, or the consumers who will have less choices and have to pay more.

Combined, the new Comcast would be a cable TV and internet access behemoth.  (They already own NBC and all their subsidiaries, and Universal Studios.)  For consumers in many areas a merger would leave them no choice but to sign up with Comcast.

See where this is going?  Look at the banks:  Today just six mega-banks control the majority of the US banking industry.  Outraged by all their fees, all the ways they get into your pocket, all while producing those cute little "We're looking out for you" commercials?  *gag!*

And look at the airline industry:  Delta and Northwest are now one, United and Continental are now one, Southwest and Air Tran are now one, America West and US Air are now one, and now they've merged with American to become the biggest airline in the world.  Fees for bags?  Pay extra for a Coke?  Are in-flight pay toilets next?  Good for their bottom line for sure, but not for yours!

How come when the conservatives are making a push for de-regulation (which I more often than not agree with) they tout the increased competition it will bring to the marketplace (yea!), but when their corporate campaign contributor masters want to eliminate competition via mergers, they just obediently fall into line and vote "AYE"?

And we just let it happen, time after time.  Do we consumers get some perverse satisfaction in getting screwed?

I believe the people should control industry.  We should dictate what products and services we want, and industry should compete to give it to us.  But these days more and more industries are dictating to us what we can have, and our job is to just stand there and open our wallets.

Posted by Lowandslow at 8:16 AM