Tennessee teen arrested with loaded gun stashed in her vagina 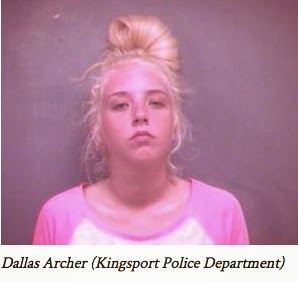 KINGSPORT, Tenn., April 23 (UPI) -- A Tennessee teen who was arrested for driving with a suspended license is now facing felony charges after officers from the Kingsport Police Department discovered something on her person during processing -- actually in her person.

While Dallas Archer was being booked, the Kingsport Times-News reported that a female officer detected an "unknown item in (Archer's) crotch."

As it turns out, the 19-year-old had a stolen -- and loaded -- gun stashed in her vagina.  According to the report, a jailer and the female officer “recovered a North American Arms 22 LR revolver (loaded) which Dallas had concealed in her vagina."

In addition to the original charge, Archer was charged with gun possession and introducing contraband into a penal facility.

The gun was stolen from 70-year-old John Souther during a 2013 auto burglary. Souther told the Smoking Gun he would be happy to have “the little fellow” back after giving it “a bath in bleach.”

Posted by Lowandslow at 6:43 AM