Throwing red meat to the lions

I watched an interesting TV show last night about the origins of the Nazi party in the immediate post WWI Germany.  (Yes, I'm a history nerd.)  Stay with me here....this is leading to a modern corollary.

It told the familiar story of a few malcontents who met regularly in dark Munich beer halls, how Hitler met Goering and the original party core was formed, etc. 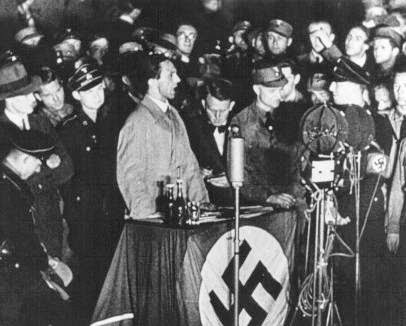 But then it told of how things were moving in slow motion until they bought a small Munich newspaper, the Das Groobenshinerbocklageramberale (not sure about the spelling).  That was their original propaganda mouthpiece, and that's when their membership took off.

They filled its pages with slanted news, sometimes factual, sometimes made up, to whip their fellow malcontents into a frenzy.  And they soon found radio had an even wider audience. 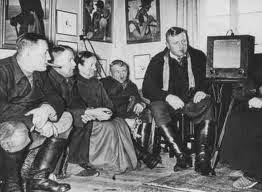 That's not likely to ever happen again.  Today we're much more sophisticated.  Or are we?  Ever watch Fox News?  In a headlong race to the bottom, they're in first place by a wide margin.  They're not even subtle about it.

They're a mouthpiece for the ultra-conservative right....the Tea Partyers, and those who are (or at least think they are) in a privileged position.  Some of their "contributors" are actually funny they're so absurd.  Fox News today is the ultra-right wing's Das Groobenshinerbocklageramberale.

In fairness, the ultra-left has their mouthpiece, too....MSNBC.  The only difference is, nobody watches it.  They once invented their own propaganda radio network (Air America) and it flopped miserably, too.  I guess they haven't read that book by Goebbels, Propaganda, Lies, and Just Plain Bullshit.  Fox News obviously has, and has even added ts own prologue.

The right says the New York Times is a liberal mouthpiece, but as long as you stay off their editorial pages, I don't see it.  It's pretty much just who, when, where, why, and how plain vanilla news.  I had a good chuckle recently when my pseudo-Tea Party brother showed me a "conservative" article in the Dallas Morning News, then started lambasting the "liberal NYT".

Only then did I show him the by-line of the article's author at the end of the Dallas News story....it was a NYT journalist.  They just copy and pasted his story.  Haha!

Anyone who quotes from either Fox or MSNBC as their source loses huge credibility with me.  People today only want to hear that which reinforces what they already believe.

We need to learn to read more widely and think for ourselves again.  We've become very gullible people.  What's that old saying about history repeating itself?

Posted by Lowandslow at 9:09 AM